You Can’t Find What You Believe Is Lost 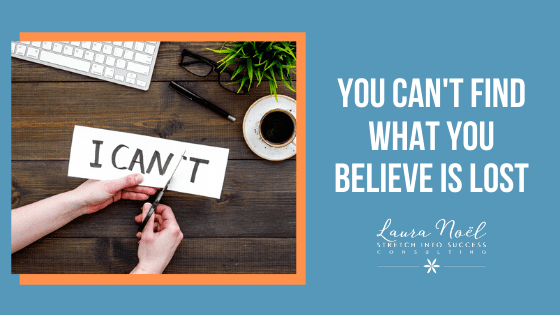 You can’t be successful if you think you’re a failure. You can’t attract abundance if you think you aren’t abundant and you’re not living that way. It’s important to instill that belief now. A quote I want to share is “Don’t cling to a mistake because you spent a lot of time making it.”  I think that is brilliant.  How many of us are locked in on a certain way of working?

I’m always testing different things and investing in my business in different ways.  But I had invested so much time and energy and finances that I came to the conclusion that it’s not working anymore the way that I want it to and I need to reinvent the wheel and let it go. And the more frustrated I was with it not working, the more I focused on it not working and the more it didn’t work. So I just thought that was phenomenal.

Whatever it is that you want you’re not going to get it if you don’t believe you possess it already.

Where are your thoughts and habitual thought patterns lying within you?  What do you constantly dwell on or think you lack? That’s a good start.   Another thing that Abraham was talking about, and I believe this wholeheartedly, is ‘you’re not lacking anything’. Just accept the perfection that’s already within you. Our spiritual DNA is 100% perfect. We don’t need to fix anything yet so often I’ve caught myself in this trap too.

We’re chasing after something thinking things like “I have to be better”, “I have to do better”, “ I have to attract more” or “I’m not good enough.”   Like we’re trying to fix something.

The thing is, is we don’t have to fix anything. We’re perfect the way we are. We are perfect. We have everything that we need to attract abundance, harmony, relationships, fulfillment and joy. It’s already inside of you. That’s the great news; we’re just going to draw it out.

I’d love to hear your thoughts. Where do you find yourself stuck in a mistake? Are you clinging to that mistake, thinking you need to fix it all the while you just keep attracting more things that are in harmony with that mistake?

Here’s the kicker, when we cling onto a mistake that we’ve made in the past and we think we need to fix something because the solutions already aren’t within us, then we start using that mistake as evidence that it didn’t work. We say to ourselves  “I’m messed up”, “I’m not good enough”,  “I’m not good at this”, “I’m not cut out for this”.  We will use that as evidence to back up the negative self-talk that we have.   But you have perfection inside of you!

Let’s start the conversation. I’d love to hear from you! Have a fantastic start to your week and we’ll connect soon.