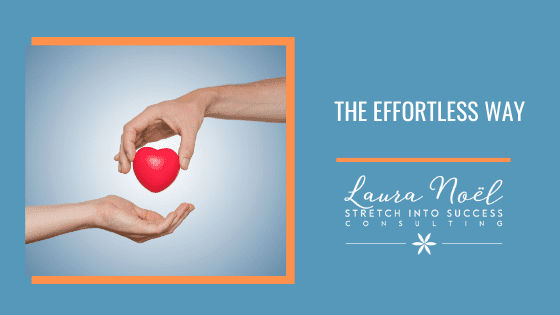 What if it could feel effortless? That’s a question I have asked myself dozens of times. Whenever I am faced with a challenge, obstacle, or big goal, I stop, ask myself about how I can make the journey feel effortless. Doing that has pulled me out of the rat race every time and saved me countless wasted hours of hustle and stress.

We are conditioned to operate with grit and tenacity, to struggle to get to that next level with blood, sweat, and tears. That level of persistence does have its place and are times when you will face a challenge that requires enormous hard work (like running a marathon). However, if you want to truly jump to the next level, then take the path of least resistance to exponential success.

I bet you’re thinking that doesn’t make sense, right? It goes against everything we have been told and taught. Those lessons and those ingrained thoughts are paradigms—and paradigms are made to be shifted. Challenging centuries of thinking with a simple question, What if it could feel effortless?, can help shift your focus from looking at an insurmountable problem to seeing the infinite possibilities.

One of my clients, Samar Aziz, an amazing leader, took this concept to heart and decided to truly apply it. When she did, everything in her life radically shifted in a positive direction in less than nine months. It not only helped her reach her goals, but it also expanded her reach and increased the ripple effect her leadership has had on her family, community, and the world.

When Samar and I met, she was already studying mindset and personal development. She had done so many incredible things in her life, including founding the non-profit organization Sabil, located in California.

At the time, she was bringing in over $250K per year in grants and donations. Her goal was to double that amount within the year. She seemed on track and had the clarity and intention she needed to get there.

Then the pandemic hit.

Suddenly, it seemed like the world was suspended in time. Every one of her goals seemed incredibly difficult to achieve in this new, shut-down environment. Samar and I had several conversations about pivoting her focus into one of moving forward in the effortless way.

Part of her mission with the nonprofit was to be of service to others. Without knowing quite how she was going to make it happen, Samar rallied dozens of people together to manufacture and distribute thousands of masks in several communities. She believed strongly that she would make this happen because it was her calling to serve during a time of such uncertainty and fear. How did that become an “effortless way” to success?

How’d that work out for her? Exceedingly well. In the middle of a worldwide pandemic, Samar was able to raise more than $750K for the Sabil Foundation. She negotiated her pay and position as the Executive Director. She achieved and surpassed her goal with mask distributions. Under her influence, her organization’s entire culture has shifted to one of serving at a greater capacity the effortless way and always being joyfully present.

Life is too short to be stuck in the rat race. Your potential is too unlimited to box it in with old ways of thinking. Stop working so hard and struggling to take each step forward when you can change your thinking and actions to be effortless and ultimately more impactful.

What are your thoughts about the effortless way? Are you willing to give it a try?