The Crossroads of Indecision 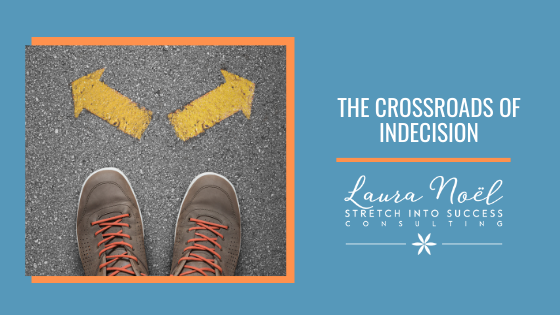 In last week’s blog, I gave helpful tips to make room for mindfulness to gain clarity. This week, I want to talk about indecision.

Have you ever seen a squirrel cross the road? Sometimes the squirrel freezes in the middle unable to decide which way to go. Then bam. It doesn’t end well for the squirrel. Why? It’s analysis paralysis. The squirrel didn’t commit one way or the other.

By making decisions the way I’m going to share with you today requires thinking differently. If you want different results in your life, you have to shift your mindset.

Let me share a story about how my commitment to a decision created phenomenal results for me personally and professionally.

While attending a personal development seminar in California where we engaged in an activity that opened my eyes to the atrocities going on in the world, I knew I wanted to contribute in a bigger way. I wanted to make a difference. At the time, I didn’t know what that looked like. I didn’t know if I was going to partner up with an organization or if I was going to strike out on my own. I just knew I had to do something.

Once I made this decision, two months later, I met the founder of an organization called the Unstoppable Foundation, a phenomenal woman named Cynthia Kersey. Her foundation was on a mission to provide clean water, education to girls, medical assistance, job training and nutrition to people and communities in the Masai Mara region in Kenya. I was so moved by the mission that I immediately signed on. I started tithing a portion of my income to the Unstoppable Foundation. I knew exactly where it was going and the difference I was making.

My thought was that by giving 10% of my income to a cause I believe in that my income would multiply. Over the course of eighteen months while I was giving 10%, it multiplied only slightly. But it was nowhere near where I wanted it to be. Because I was only looking at the money that was coming in. I gave the same amount every month. I had to stop and ask myself: Have I doubled my contribution to this charity? No. Have I tripled my contribution to this charity? The answer was still no.

By now, I had learned how universal laws work. It was time for me to step out in faith. It was the only way I was going to grow. With sweaty palms, I got online and donated another $1,000. In that moment, I didn’t have the income to support that giving.

But the next day, through my marketing funnels, somebody reached out and asked to work with me. She enrolled as a client, and that supported my giving. The next month came around, and I decided to triple my contribution.

The day after that, I called a woman who had mentioned she wanted to work with me. She happened to be in the car with three of her friends. She asked if it would be okay to put me on speaker and to have a consulting call with everyone listening.

That’s not how I like to conduct my calls. When I speak with a potential client, I insist they are in a quiet place where they can speak freely. I don’t want them to feel pressured. But for some reason that day, I agreed to have the call with four people in the car. After thirty minutes, all four of them become my clients. All four of them put a deposit down. That supported my giving.

After that, I gave another $1,000. In addition to my giving, one of my goals was to travel to Africa to see the impact my contribution was making. Shortly after I made my latest contribution, I got a phone call from the Unstoppable Foundation. They said I was close to funding an entire village! If a donor funds a village the foundation invites them to Africa to see the progress. There was a couple who had dropped out of the next trip, and it was a quick turnaround, but my husband and I went. It was the most incredible experience I’ve ever had.

I never would have done it had I been making the decisions based on the income I was bringing in at the time instead of having faith. I never would have thought I would travel to Africa to see the village I was supporting. But I kept giving and money kept showing up.

We are taught as kids that if you want something you need to know how you were going to get it, especially financially. But if you want to create different results in your life, you have to flip that conditioning on its head.

You have to be willing to make a committed decision to what you want. You have to decide to go for it. This is the star you’re going after no matter what the circumstances. You have to stop regarding that as your reality and start tapping into the ideas, thoughts and desires you have. You have to have faith that those desires are your reality. That’s when things are going to shift for you.

For me, what happened was an incredible situation. You can make shifts like this to. It’s not easy, but I’ll take you step by step through the process. A great place to start would be to head over to www.ratracereboot.com and download The Six Mindset Changing Techniques To Lead A More Fulfilled Life. It will help you to dig in to what you want and what you desire not only in your career, but also in your life. It’s up to you to decide.