Resting Is The Best Way To Be A Workaholic 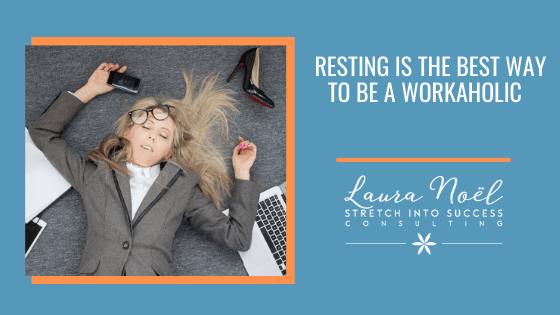 Everyone is looking for that one secret that will have a huge impact on their results, level of fulfillment, wealth, relationships, and themselves. So they work harder and harder, putting in long hours every week, convinced that being a workaholic is part of the magic recipe.

The undervalued and vitally important concept of rest is the answer you need. Yes, I said rest. When I speak to my clients about that, they think I’m crazy. I get it. There was a point in time where I thought that taking any kind of rest meant I was lazy. My mantras back in the day were the same as many of you: it takes energy to make energy. I can sleep when I die. We are in a culture that idolizes people who are in the hustle and grind. We reward and celebrate that behavior, and ironically, sometimes envy those people who work constantly.

However, when you’re stuck in that grind of constantly working, building your business, and always doing things, you’re actually playing small. You’re undoubtedly a hard worker. I’m a hard worker and always have been. But now, I’m a different kind of hard worker than I was before. I started working in a different way and became much more effective in far less time. You can do the same.

It’s all in the pause. What that pause looks like is different for every. For me, I and to take Fridays off. I used to make Fridays my day for overflow appointments. Anything that couldn’t fit into the regular week was wedged into my Fridays. I would work and work until I collapsed at the end of the day. It was an insane schedule that made me unhappy and resentful.

Now, my Fridays are sacred. I make a commitment to myself to maintain the integrity of that day because Friday is when I take time for myself to recharge and reflect. I sit in a quiet room, take time to meditate, and dig deeper into my creative senses. We’ve all been blessed with God-given mental faculties, imagination, intuition, memory perception and the ability to reason.
However, when you’re living from the inside out, you’re tapping into that innate creativity, and the intuitive voice within you, which drives better decision making. When you’re caught in the rat race, you’re “on” all the time, and there’s no time to reflect or think. Essentially, you are being driven by external circumstances, which is the antithesis of creative and expansive thinking.
Think about it this way- when you’re working with a personal trainer, they insist on taking rest time between hard reps, and rest days between though workouts, because that’s where the growth happens. The same is true with your mind. You need to work it hard, and then use the times of rest to give your mind a chance to grow, expand, and create.

So how do you start doing that, when you are in it, and on it all the time? Start by writing a list of things that you would love to see in your schedule, whether it’s having time to meditate, take a walk, workout, be at family dinners, etc. If you’re missing those moments and it’s taking a toll on the most important relationships in your life, add them to the list. If you want to be at the school play or your child’s track meet, write it down. If you haven’t taken a vacation, in eons add that, too. Then take a blank calendar and start plotting your days around those things, instead of shoehorning your most precious time in with a crazy work schedule. These moments, with the most important people in your life, should be sacred, and it’s up to you to make them so.
I get that this is going to be tough at first, especially if you’re the type of person who barely has a moment to think. The idea of cutting down to a four-day workweek or even cutting your working hours by 20% is probably going to be a big leap for you. It’s okay if you start small, maybe by taking a half-day on Fridays. The point is to put it on your calendar and maintain the integrity of that schedule.

A client of mine is a coach for other CEOs and startups, and he was much like the rest of us—a phenomenal human being but someone who was always working and in demand. People want him to be a part of their projects and he’s the kind of guy who says yes.

Because he wants to be of service to others, but he was stretched in so many different directions that it began taking its toll on his health and his ability to be present for his family.

He began working with me, and slowly but surely, he reduced his schedule and stopped overcommitting so that he could focus on one project at a time. He chose to devote his energies to whatever he was truly committed to and aligned with, and because he focused on his passions, it didn’t even feel like work.

It was exciting and scary for him to flip his schedule, but as soon as he realized doing so gave him so much more time for himself and his family, he committed to making this work. He has his morning routine for workouts and eating right, and at the end of the day, he’s home with his family. He’s begun taking impromptu trips with his family, something he would never have done before. He’s living life in a completely different way. Instead of being less effective, he’s more effective in the work that he’s doing.
Ask yourself why you’re doing all this work if you don’t have time to enjoy it? When you constantly push yourself to the limit, you are actually holding yourself back and erasing that necessary space for growth. You aren’t moving forward– you’re just running on the same hamster wheel every day.

Today, I want you to write down that list of things that are important to you. Then put them on a calendar and actually schedule them into your week. Start small, make that time sacred, and hold yourself accountable. Begin putting yourself in integrity with yourself and your calendar.

When you do, add a comment about what you’ve decided to implement or change and how it’s working for you. I want to support you, and I want us to support each other in this community because we need to be the change we want to see in ourselves. I look forward to the conversation- and the creative thinking you’ll be fostering.