Release and Forgive to Move Forward 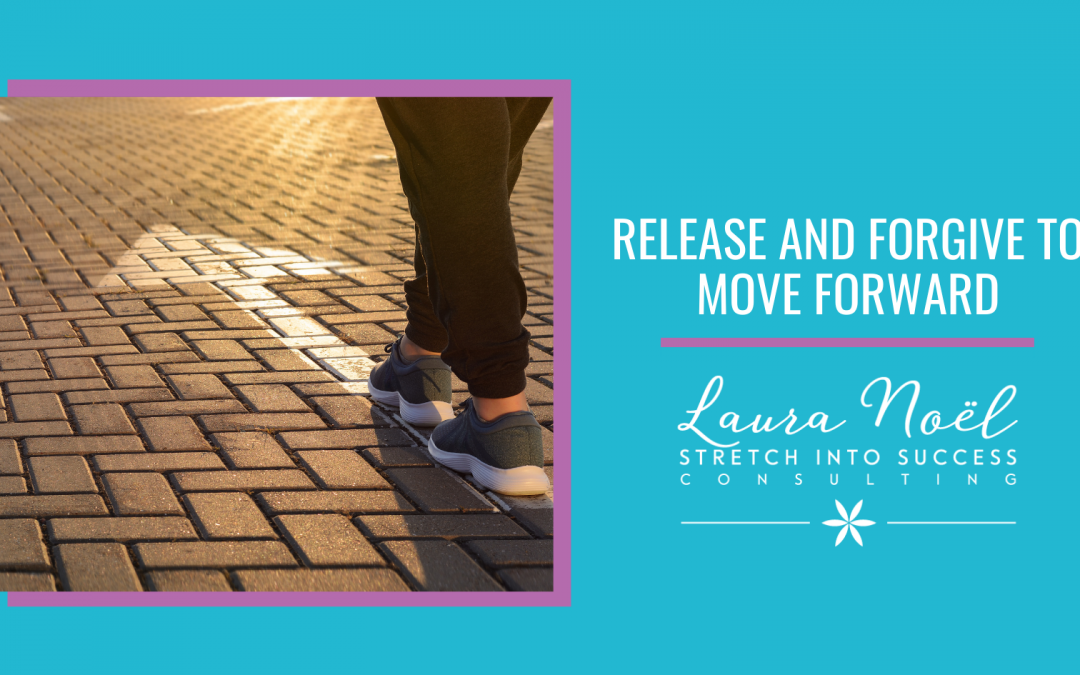 Have you ever felt completely stuck? And no matter what you do, you can’t seem to move forward? Maybe resentment and anger are the glues holding you in place. Releasing and forgiving are the keys to being able to let go, so we can move forward and create something beautiful and new.

When you hold onto past mistakes, resentments, and anger, it’s like holding onto a hot coal and expecting the person beside you to get burned. They don’t; the only person getting hurt is you. So how do you go about releasing and forgiving? You have to start with yourself, and then the other people in your life.

In a previous blog post, we talked about starting the process of doing mental housekeeping and gaining some clarity on the things that you desire as well as celebrating some of the wins for the things that you created this past year. In the midst of gaining clarity, you should also be asking two questions: How can I serve? What is my purpose? Knowing those answers is key for knowing how to release, forgive, and create something new.

Sometimes we set goals for ourselves and at the end of the year, we’re surprised we didn’t get traction on that goal, or it failed miserably, or we made several mistakes. We often hold onto that shame or guilt for not achieving what we set out to do. Let it go. Learn to forgive yourself. Sometimes the goal you set wasn’t the right goal for you.

Ask yourself (and be really honest): Was I setting this goal to appease somebody else? Was I doing what somebody else thinks I should do?

I’ve been there. I’ve failed or missed the mark and felt an enormous amount of guilt, followed by a lot of justifications. I buried the feelings, because expressing those negative emotions is not the cool thing to do. The emotions are still there, however, coupled with dissatisfaction and unease. Releasing those emotions frees you up to fill that space with positive thoughts and energies.

Forgiveness is not weakness. When you forgive somebody who’s done you wrong, it doesn’t mean they’ve won or they’ve gotten one over on you. It doesn’t mean their behavior was acceptable or that you’re willing to accept it moving forward. It just means that you’re choosing to let the whole thing go. There’s an old adage about resentment that says it’s like taking poison and expecting the other person to get sick. Resentment and anger don’t hurt the other person. The only person that it’s weighing on and hurting is you, while that other person is probably living their best life. They’re not even thinking about that situation.

Whether the event happened last week, last month, or ten years ago, harboring the resentment and anger is keeping you stuck and stagnant. You can’t welcome anything new until you let it go.

“We energetically metabolize our experiences every day and often we allow a difficult or stressful experience to build up. And ultimately that negative energy drains us, it dims our light, and knocks us out of balance.” Bob Proctor said that. His message is that we are responsible for the energy we choose to carry. It’s not your family’s responsibility, your boss’s, your spouse’s, your friends’. None of those people are the guardians of your energy. Only you are.

On the flip side, when you internalize positive energy and you keep the negative at bay, you recharge every fiber in your being. Just as other people aren’t carrying your energy, they aren’t creating it either. When you forgive someone else, you’re creating forward momentum by releasing the negative energy and taking responsibility for your own energy.

In the post about gratitude, I talked about sending love, even to people who are getting on your last nerve. There’s an energy in doing that. As you’re releasing this positive energy, start thinking about what you want to create in the new year. As you do, you will be getting in vibrational harmony with everything that is good in terms of what you want to create. Even if you don’t know exactly what your goal is, by releasing that negative energy in forgiveness and choosing to abandon any negativity, you are ascending your level of vibration and your energy. You then attract all the things that are in harmony with you. That’ll enable you to be even more creative and better tap into your inner wisdom and inner GPS, allowing your intuition to gain more clarity. Doing this has a huge positive effect on everything within and around you.

Think about someone you want to forgive. Get out a piece of paper and write a letter to that person (you won’t be sending it). Come from an honest place of saying, When you did this, I felt hurt. Talk about the things you have been holding onto for so long.

Now tell them that you realized they were doing the best they could, given where they were. Write,

I release you and I forgive you fully and completely. You have to mean it and feel it when you write it.

Look for the good things that you learned or that happened to you from this experience. Nothing is all good. Nothing is all bad. Bring that into the letter. Something like, You did X, Y and Z and I felt this way. I forgive you and I’m letting it go and releasing it. But there has been some good that came out of this experience and I learned these lessons.

You might feel emotional getting it all out on paper so be sure to do this during a quiet time in your day. If there are other people you need to forgive, write them letters, too. Then write a letter to yourself, forgiving yourself and letting go of a mistake that you’ve made. Once you finish this process, take all of those letters and burn them. If you don’t have a place to burn them, shred them or rip them into tiny pieces. It’s a pretty cathartic thing to do. The goal is to let it go fully and completely so that you can gain forward momentum and create some new experiences in your life.

Another option is to have a do-over. Whenever you do or say something and afterwards think, Gosh, that wasn’t the best version of me, I want you to stop the conversation and say, “You know what, that didn’t come out the way I wanted it. That’s not how I want to come across. Could we have a do-over?”

The other person will appreciate it, and when you have the do-over, you can show up as your best self.

Before you go to sleep, run through a mental rehearsal of your day. Were there moments when you weren’t being the highest version of yourself? Maybe you got bad news in the mail or someone annoyed you. Whatever it was, have a do-over right there in your imagination. Your subconscious mind doesn’t know the difference between what’s real and what’s imagined, but it will remember this more positive ending.

Rewrite the moment in your mind, and go to sleep with that highly elevated feeling and vibration. When you wake up in the morning, you’re going to feel like a million bucks.

Releasing and forgiving are two powerful tools in your mental arsenal that can totally transform your life. Try it today, and see how the changes begin opening new, more beautiful paths to you!