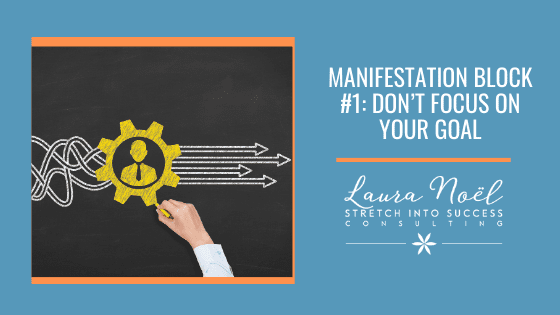 For centuries, we’ve been told that if we just keep our eye on our goals, we’ll achieve them. Actually, the exact opposite is true. It’s better if you don’t focus on getting your goal.

Wait…what? Aren’t we supposed to be fixated on what we want to achieve in the future? Isn’t that how we make progress and gain momentum? The short answer is NO.

I remember when I first decided to start my coaching and consulting business. I loved teaching people about Universal Laws and how to leverage them to move forward faster, and I couldn’t wait to share this information with as many people as possible.

I started my business while I was still working full-time, meeting with potential clients on the weekends. In a few months, my business exploded with clients and referrals. I loved what I was doing, and every day brought a new excitement and joy. But as I approached the exit date for my job, bringing me closer to my goal of serving clients full-time, an ugly unconscious thought began to run incessantly through my mind: What if I fail?

Even though I know a lot about goal achieving and the Law of Attraction, I found myself in an unconscious state of fear, trapped in the constant hustle and grind, continuously wondering where my next clients would come from.

I became so focused on myself, my goal, and this fear of failure, that even though I was doing all of “the right” things to make it happen, I was unconsciously repelling my goal. I was focused on the negative instead of the positive, and unwittingly building a space where the negative could come true.

I watched my bank account dwindle while the date when I would be on my own as an entrepreneur approached at warp speed. In a state of internal panic, I stopped donating to an extremely important cause to be “safe” with my money and have a financial cushion. I was constantly worrying about whether I would have enough clients, enough income, and enough work. What if I fail?

My decision to stop donating and play it safe backfired, and for a very simple reason: I was working against the principles of Universal Laws and The Law of Attraction.

It took me about a month of living in a hole of despair and worry before I finally had this ah-ha moment. The minute I realized I was manifesting the wrong future, I called the charity and reinstated my donations, without worrying whether I would have that safety net to catch me. I changed my thoughts to knowing I would succeed.

I started focusing on serving my current clients even better by adding more value to what I had initially offered. Less than a week later, several new clients enrolled in my program, which more than paid for my charitable giving.

I decided to double my contributions for the next month. The day after I made that decision, I onboarded four new clients who supported my giving.

Fast forward to today. I consistently emphasize being of service, and when ideas bubble up to the forefront of my mind, I follow them and go all in. I don’t worry about failure. I focus on what I have to offer and how it can benefit others.

This thinking is all based on one of the Universal Laws, The Law of Compensation, which states:

You will be compensated in direct proportion to:

In a time when you may feel compelled to retract, give more; not to get, but to be of service to others.  When you may be tempted to scale back, reach higher.  Where you might be feeling fear, feel confidence instead.  Focus on point two of the Law of Compensation, which is all about doing what you do and providing such excellent service that you aren’t thinking about “getting”.  Instead, you are focusing on giving and are always willing to do more than what you are being paid to do.

Goal achieving isn’t about “getting” a goal; it’s about growth and expansion and about what you can do with your goal.  You aren’t just going through the motions, you are living, breathing, and being that person who has already achieved success.  When you believe it in every fiber of your being and believe you are the right person for this job, you create a future that is limitless.