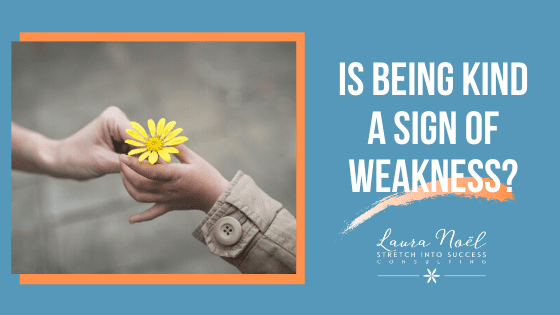 Aloha!  The other day I had a post up about never regretting being kind.  And I loved one of the questions on that post.  Somebody mentioned that they felt like people were seeing their kindness as weakness.  I disagree and I thought this was an important topic to talk about because I believe that being kind is not weak.

There’s strength in being kind.   You can be kind and still stand in your power and your truth.

Being kind is not the same as being a doormat.  Being a doormat implies feelings of inadequacies, of being weak, fearful or just not feeling good enough.   Being kind doesn’t mean being a pushover. So what I’d like to propose to you is to think about being kind in general as well as also being kind to yourself.   If you are putting yourself in a position where you feel like you’re rolling over to everyone else’s wishes and desires and putting yourself last constantly, because that’s the idea of what kindness is to you, then yes, it will probably be perceived that way by others.  Likely they won’t knowingly take advantage, but it will become a habit. You can be kind to yourself and others by saying ‘no’ to things that don’t serve you, to things that are detrimental to your wellbeing.  And you can say ‘no’ with kindness and grace.

There’s a story that I love… the story where a woman was asking a family member for help to do some research for her.   She was feeling frantic and struggling and her family, although always there to help, this time said ‘no, I’m not going to help you. I’m not going to because you’re capable of doing this.’  And so they were kind in strength and in holding with love, the space of love.   They were holding her capable of handling something. And what ended up happening is she felt empowered and felt stronger and she took care of this thing herself and it just bolstered her confidence. So that’s also an example of a way of treating somebody with kindness and saying ‘no’ with grace.  You’re leaving that person better off than when you found them.

I talk about leaving people with the impression of increase and that’s leaving people better off than when you found them or leaving situations or places better off than when you found them.   Always in every interaction.  It takes no more effort to be kind to people than it does to walk by and stare at your cell phones and ignore them. So you could be kind to somebody at the checkout at the store. You could be kind to somebody on the road.  If you let somebody in and merge.  You can be kind and just tell somebody how much you admire their smile or their eyes or something they said that resonated with you. You could just pick up the phone and call someone and just say, hey, I was thinking about you. I love you. That’s being kind. That’s showing kindness and that is never weakness.

And when you leave people with the impression of increase, that energy always comes back to its source. Now you’re not being kind for the sake of being kind.  You get something that’s a different feeling all together. But the truth of the matter is when you put that positive energy out; it always comes back to you.  It might not be in that exact moment, it might come in another way, but it will come back.   One of the things that we often forget is to be kind to ourselves.

When we protect our energy and we take care of ourselves and we’re kind to ourselves, we can take care of more people. We can spread that love, joy, kindness and enthusiasm around.   You can’t serve others when your cup is half full.    You know like in an airplane, when they tell you to put your oxygen mask on first and then help others?  Well, it’s the same truth. Take care of your energy, protect it, honor yourself and then extend it out to others.

And if somebody else perceives your kindness and your smile as weakness, well guess what? That’s their paradigm. That’s their belief. That has nothing to do with you. And honestly, what they think or what you think they think is none of your business anyway, right? We’re not mind readers and we can drive ourselves bonkers trying to think and discern what other people might be thinking about us. And most of the time we’re wrong anyway. So there’s no weakness in being kind.  You can be kind and stand in your power, stand in your truth. You can be kind and say ‘no’ with grace. You can say ‘no’ and be kind and empower somebody.   That’s kindness in and of itself.   So stand in your power, stand in your truth. You know you are strong.   Just be kind, just do it.   It will always come back to you!