How Do You Know When You’ve Found Your Purpose? 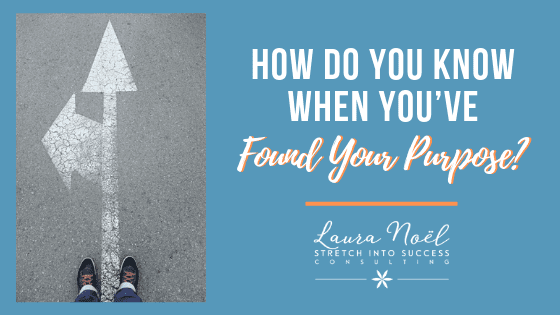 I wanted to share with you how I found my purpose, because that’s what a lot of people ask me about and seem to be looking for as well… their purpose. There were distinct action steps that I took that you can take as well.  Here’s how that process began and progressed for me.

I was in the military for almost 28 years, and during that time, I was collecting degrees and certifications. I didn’t know what my purpose was until finally, at the 27 year mark, I saw Bob Proctor at an event.  I got up in front of 500 people and asked him,  “How do you know when you have found your purpose?  Because I’m collecting all these degrees and certifications and trying on this opportunity for size, this certification for size to see what would stick and I don’t feel like I’ve found mine.”  If you’re around my age, you would likely remember the Brady Bunch. What I was doing kind of reminded me of the episode where Marsha started high school and wanted to figure out how to be involved.   I remember her signing up under every activity she could find posted on the boards in her school.   And she quickly became overwhelmed because she was signing up for everything. That’s kind of how I felt.  I was doing so many different things and nothing seemed to stick.  What really landed me on my purpose is that I really got grounded in my intuition. I learned very early on to trust my gut instinct. Now what I do is help other people accomplish the same.  Helping them find their purpose and transition from jobs to being an entrepreneur and accomplishing their bucket list items.

So let’s backtrack a bit before that event with Bob Proctor & my question. For many years, I had a strong urge to get a yoga certification. The idea kept coming up and I kept researching it, but I was waiting for military tuition assistance to cover it and yoga was never really a part of that construct, so I kept putting it off. The idea continued to resurface and the urge finally got so strong that I just decided to go for it. I didn’t know where it would end up going, but I decided to do it anyway.

After I signed up,  another opportunity presented itself to attend a yoga philosophy week-long class in Hawaii, and it was free.  All we had to do was take care of our transportation expenses there and our lodging.  So I went to this yoga philosophy class. I just had this urge to go and I went.  I soaked it up like a sponge, not really knowing where this was going to lead me.

Soon after that, a friend convinced me to teach yoga for the chiefs at the Hickam Air Force Base (Hawaii). That’s the push that I needed to start teaching. Once I did that, I started seeing a shift in the people I was teaching.  Their moods were better, their backs felt better and such.  They had injuries from deployments and things like that, and they were just starting to feel overall wellness.

I really liked the mindset part of yoga so I started looking for a curriculum. That’s what really started to resonate with me the most, the mindset aspect of yoga as opposed to the activity. I wanted to find a curriculum where I could teach these concepts, but also something a little more palatable for people who ordinarily wouldn’t seek out yoga.  I got inspired to go to a personal development seminar. The urge struck me, so I went.  Bob Proctor was there and that’s when I got up and asked the question.

Never in a million years would I normally get up in front of 500 people and ask a question.  Typically my heart starts pounding out of my chest and I get really nervous. But I did!  I felt inspired to get up. It was like somebody shot a flame under my seat and I was like, “Whoa, how do you know when you found your purpose?”

Then Bob Proctor said, “You know, we have a program I think you’d be really good at. Give me your contact information.” I didn’t know what it was, but again, I tapped into that feeling. Every hair on my arm stood up and I was like, “Yes, I’m in. I don’t know what it is, what it costs, I don’t care. I’m in,”  because I went there with theintentionof finding a curriculum. I knew what I wanted to share with people, I just didn’t have all the tools yet to do so. When Bob started talking it was like, “Aha, that’s exactly what I need. That’s the curriculum. I love the way he’s sharing this.”

I talked about this last week…. when you get a strong inclination to do something, take the action. If you’re searching for something, maybe it’s your purpose, maybe it’s your next step, maybe it’s your next career or that next wonderful activity that you’re going to do, maybe even a life changing event. Be aware of your surroundings because when you get that inclination to do something, you should act on it immediately. It might not make perfect sense in the grand scheme of things, and you may not be able to connect the dots moving forward, but do it.  Steve Jobs said: “You can’t connect the dots moving forward. You can only connect them when you’re looking backwards.” I didn’t know that I was going to be doing this for a living. Here I am two and a half years later and living a life of freedom, teaching this to people and absolutely loving it!

When I started this journey years ago, I had no idea I was going to land here, but I listened to my intuition when I had the desire to follow a path or to learn something new. Even though I couldn’t see what I was going do with that information, I just did it for the enjoyment of it. Then that led me to the next thing, and when I felt a strong compelling desire to do that, I did it.  It’s the repetition of listening to yourself and your inner wisdom. You know exactly what you want to be doing. You know exactly how you want to be living and serving and the things that you want to get out of life. You know intuitively. That’s your inner wisdom.

This is my purpose now. Is it going to grow? Yes, of course it is. Where? I don’t know, but I will keep taking inspired actions.