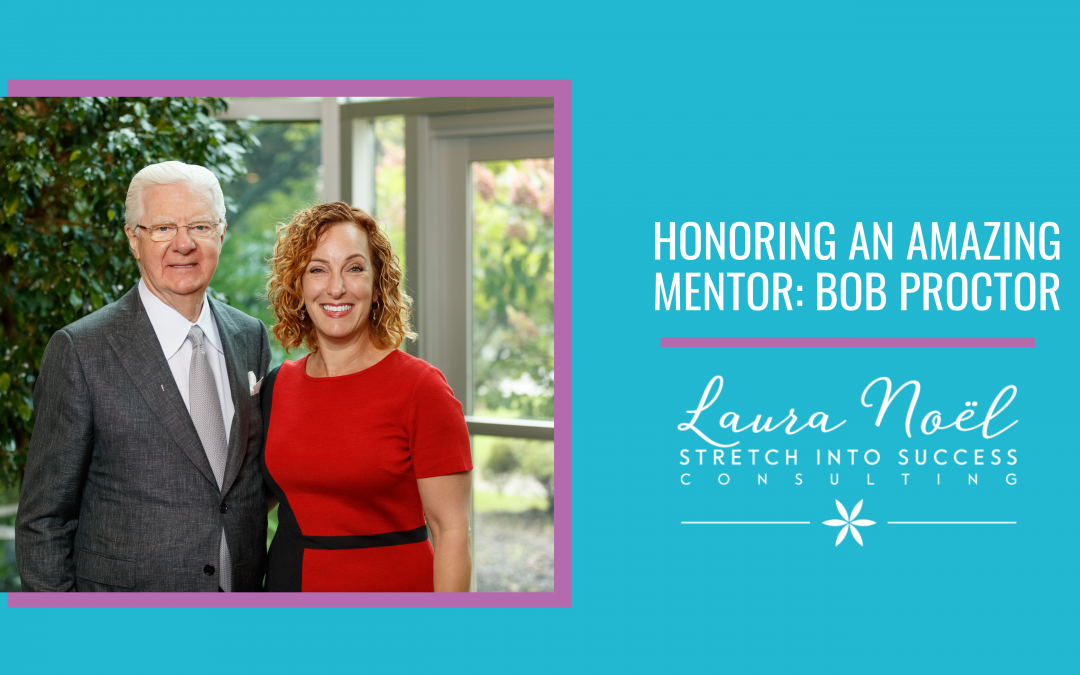 “Do your work. Not just your work, do a little more, but that little is worth more than all the rest. And if you suffer, as you must, and if you doubt, as you must, do your work. Put your heart into it, and the sky will clear. Then out of your doubt and suffering will be born the supreme joy of life.” –Dean Briggs

Bob Proctor shared that quote from Dean Briggs numerous times and I wanted to share it with you because today’s blog is all about honoring the late, and great, Bob Proctor.

On February 3, 2022, Bob Proctor, the Global CEO of the Proctor Gallagher Institute and the author of You Were Born Rich, passed away. He was a mentor and coach to me as well as a phenomenal human being who left behind an incredible legacy. I had the privilege and honor of personally working with him and learning so much. I’m so incredibly grateful for that time I had with him.

Bob would not want people to mourn and be stuck in their grief. He’d rather we celebrate his life. Although I feel sadness for the loss of his physical presence, I know that his energy is all around me and I can tap into that energy anytime I need to.

I wanted to include the press release from the Procter Gallagher Institute because I think it’s so beautiful and say so much about the lives he touched:

When W. H. Auden penned the line, “Stop all the clocks,” he knew that this moment in time would come for us at the Proctor Gallagher Institute (PGI). On Feb. 3, 2022, PGI Founder Bob Proctor transitioned from this life of natural causes.

There are only a few moments in time when the whole world stops to mourn the loss of a single soul. Literally millions of people have been touched by this personal development legend, who began his journey in 1961 after being handed the book, Think & Grow Rich. From that beginning, Bob Proctor shifted his own world on its axis. Then, he decided it was time to help a bigger world of people do the same.

In 1961, fueled by reading Napoleon Hill’s masterful book, Bob opened a cleaning company, starting with a single office in his hometown of Toronto. A few years later, he sold that company because he felt called to begin teaching the accelerated success formula he had implemented for himself. By 2021 – sixty years later – Bob Proctor’s rich teachings had found their way into every single country around the world. Further, his personal mentoring within the ranks of his own company ensures that, for many years into the future, the Proctor Gallagher Institute will continue the legacy Bob established.

Renowned for his trademark sentence, “Tell me what you want and I’ll show you how to get it,” Bob helped millions of people recognize their spiritual perfection and take back the reins of their inherent power to begin believing, acting in faith and creating the lives of their greatest desires.

The best-selling author of numerous titles, including his first book, You Were Born Rich, Bob Proctor was a prominent teacher in The Secret movie (2006) and has been featured in many additional films, books, documentaries and talk shows. His YouTube channel offers hundreds of his videos of warm advice and instruction, reaching more than 1.4 million subscribers around the world.

Bob Proctor was tireless and driven, his only mission in life to reach one individual after another, assuring each and every one that not only could they achieve greatness…but that greatness already lived within them.

It’s my honor to keep moving Bob’s legacy forward. If you’re dealing with loss, whether it’s the loss of Bob, a family member, a friend, or somebody that you love, I hope that his words of wisdom help you. He said to me all the time, “There’s no such thing as death.” I believe that wholeheartedly because if you study science, it proves that nothing is created or destroyed, we’re simply moving into one form or another. Death in and of itself is simply a transition, just as birth is a transition. As Bob has said, “My soul moved into this body and it will move out.”

If you’ve lost someone, I hope you realize that they have simple moved on to the next phase of their life and that you can connect with their energy and presence anytime you want to. Everything is energy, including our thoughts. We can tap into that energy whenever we want to through our memories.

If Bob was here, he would ask, What is your purpose? I think this is a good time for all of us to start thinking of our legacy. For me, if I can live my life the way that Bob led his, which was standing in his purpose, living his legacy, and sharing his gifts with the world, then that is enough for me. He did that until the very end and maybe still is.

Some of us were joking and saying, “I bet he’s in heaven right now. And he’s already got his website up and his PowerPoint slides rolling.” He’s still teaching, because he’s teaching through me and through every one of us who have learned his body of work. Bob believed in being a student all his life. He took the principles and ideas that were passed down by many thought leaders over generations and then packaged it in a way that really helped people access the greatness that’s already inside of them.

In the words of Bob Proctor, tell me what you want. And I’ll show you how to get it. If you want more information, go to RatRaceReboot.com. Connect with us, subscribe, email me. I would love to have a conversation with you.

In the coming weeks I will share some of the wisdom that Bob gave me directly. I’m going to get really vulnerable and open up about some of the things he told me back when I met him in 2016. Until then, remember, everything’s created twice, first in your imagination, and then in physical form.