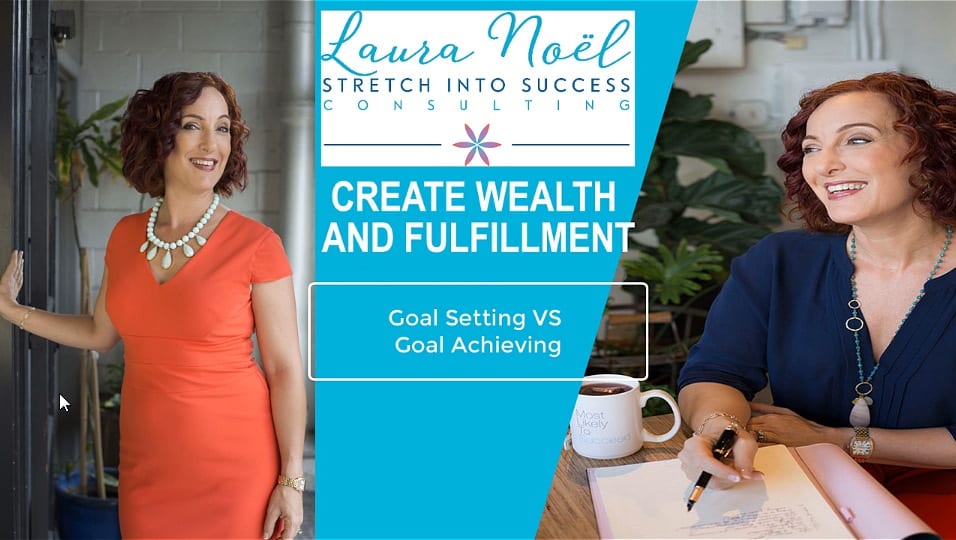 Earlier we talked about finding your purpose, and what are some of the steps that I would suggest that you take if you really want to go down that path, and discover it. Today I want to talk about goal setting versus goal achieving, and why I think the traditional way of thinking about smart goals isn’t so smart. I know that some of you might not agree with me. However, let me explain because this has been life changing for me.   [youtube https://www.youtube.com/watch?v=R3iDksPdfhE]

Goal Setting Is An Intellectual Process

Smart goals, or goal setting actually, is an intellectual process. Goal achieving is a lawful process. It’s based on universal laws, and we talked earlier about the law of attraction and the law of vibration. With goal setting, since it’s an intellectual process, often times we’ve been taught to set goals that are SMART, using that acronym. SMART goals are Specific, Measurable, Attainable, Realistic, and Timely. Or, there’s a timeline associated with that. I have no issues whatsoever with being specific and measurable. Where the rub is for me, is attainable and realistic. We as human beings, have infinite potential. We’re capable of so much more than we can even fathom. We tend to hold ourselves back with limiting beliefs, what we believe we are capable of achieving. We base these beliefs on what we have accomplished in the past, our successes, our challenges, our degrees, and our certifications. We look at what we’ve done in the past to determine or what we’re capable of doing in the future. I’m here to tell you, what we’ve done in the past has no bearing whatsoever on what we’re capable of doing in the future. I do have a bit of an issue with a part of the SMART acronym, in particular the words attainable and realistic. We have infinite potential, and yet we hold ourselves back. Therefore, if we set goals that we think are attainable, then we’re really just setting goals that are based on our conscious awareness of our limiting beliefs, and where we are right now. When we set goals based on what we think we’re capable of doing right now, realistic goals, those goals often times will keep us stuck where we are. For example, when we’re setting goals that are attainable, and realistic, they keep us stuck where we are. What often happens is that we set goals that we’ve set before. Our goals become more of a checklist item. We’re setting the goal, we may have accomplished the goal last month, so we’re doing it again. We check it off the list, and we feel good about ourselves. The next type of goal that people set, are goals that they think they can do. They’re making incremental, logical steps towards that next milestone, or that next goal. They’re calling it a goal, but they already know how to reach it. There is no inspiration or strategic vision in that! I learned this the hard way, and it was after I started studying this material, and I could reflect back that I realized what I was doing. Maybe you can identify with this. The good news is, is we can change it. But, at one point in my life, I was setting goals, and they looked really big from the outside looking in. I looked like I was really successful. I was very goal oriented. That is a character trait that someone would have used to describe me. I would set what I thought were “big goals,” one after the other, after the other, after the other. All of these orderly goals became too much for me. I had this insatiable urge and desire to keep achieving, and I was not fulfilled at all. In fact, I remember talking with a girlfriend of mine, crying, saying, “When is it going to be enough? When am I going to be enough?” Goal achieving in and of itself became a goal. I didn’t really have a strategic vision for my life. I found that I kept chasing after goals. I felt good initially about achieving the goal, but I really had no joy after I achieved the goal, because it wasn’t tied to anything. It wasn’t heart centered, it was simply an analytical process.  As in, “Oh, well I’ve reached this goal so now I’m going to go to this milestone.” I don’t want you to get caught up in that same trap that I was caught up in! When I started really looking at smart goals in a different way, that’s when I began to set goals that were really big. I was setting less of them, but the goal was so big, and it had a lot more meaning. Then, when I hit milestones, I truly feel joy when I reach those milestones. That’s the issue I have with smart goals, with the attainable and realistic part of it. Now, let’s talk about goal achieving.

Goal Achieving Is A Lawful Process

Goal achieving is a lawful process, meaning the laws of the universe. When you are setting goals that you’re emotionally involved in, and you’re in vibrational harmony with the goal that you want to achieve, that’s when the people, resources, creativity, and ideas will just seem to flow to you. This is how the law of attraction works, and through the law of vibration. When you set big goals, I don’t want you to set goals that you’ve set before, or goals that you currently know how to accomplish. I want you to set a goal that is worthy of you, not a goal that you think you’re worthy of, based on your past experiences. What does that mean? It means that you’ve got to start by allowing yourself to dream, allowing yourself to use your imagination. Start by putting pen to paper, and writing it down. This is not an easy exercise, and I don’t want to make light of this. Some people might have ideas coming off the pen right away. For other people, it might take a few days before the ideas begin to flow. Consistently write your ideas down every day. If you need inspiration, take five or 10 minutes to visualize what you would love to be, do, or have. Take cues from listening to yourself when you’re speaking to friends. Make note when you hear yourself saying, “God, wouldn’t it be cool to go here with family and friends?” or, “I’ve always wanted to do that. How do you do that?” Those are clues that you’re tapping into things that you’re interested in. Write them down. Do not allow yourself to get hung up in the how. The how at this point is unimportant. This is how you get tapped into the beginnings of setting a goal that’s worthy of you, and not something that you think you’re worthy of based on your past circumstances. Let’s go back to the SMART acronym. Let’s look at this in a different way. You want to use all of these dreams and ideas and whittle them down to one or two goals. You want a Specific goal, you want it to be Measurable. It will be Attainable, now that you understand that really, anything is possible. If we have infinite potential, then truly if you can imagine it,  it’s attainable. That really makes it a wide open goal. When we get to Realistic, I want you to erase it, put a big X through that, and I want you to write Risk. What I mean by risk is, does this goal stretch you? I remember going through another personal development seminar, and a mentor, Ann Pass Waters, if you’re out there. She asked the question, “If you set this goal that’s really big, who do you get to become when you reach that goal?”. I thought that was just such a beautiful question. I ask that of myself all the time. For example, let’s say I’m writing a book and it has not yet materialized. When I reach that goal, I get to become an author, I get to be more confident. Yes, in my mind I want to create that vision of myself now. But it will have manifested into me actually becoming that author. Does that goal stretch and grow you? That’s what goals are designed to do. Does it excite and scare you a little bit at the same time? Then you know you’re on the right path. Then ask yourself, “Who do I get to become when I really see this goal through?” Those are going to be clues and indications that you’re on the right track. That’s where you’re going to find your inspiration. Is it going to be rainbows and unicorns all the time when you’re going through for your goal? No, of course not. You’re going to hit challenges. But, if you’re really tied to a grander vision of what you want for yourself, then that’s what’s going to give you the oomph to get out of bed, get excited, and start working toward that goal each and every day. For the next week or so, write down ideas. Things that you would love to be, do, or have. Then start to narrow it down to one or two things. I love this quote: It’s not who you are that holds you back, it’s who you think you’re not. – Dennis Whatley Don’t get in your own way, allow yourself to dream. Commit, and pick one or two things that you would love to be, do, or have right now. Join my free Facebook group if you want that support. If you go on to Stretch Into Success Facebook page, you’ll see “Join the group” at the top. It’s free to join, we have some wonderful individuals in there, and you will have a great team of support there. I’m looking forward to seeing you in the group. So have a wonderful rest of your day, and I’ll see you soon. Laura Noel works with individuals, groups, and companies in reaching their potential and achieving their personal and professional goals. As a student and teacher of personal growth and leadership for over 27 years, Laura continues to develop her expertise through working with her mentor, Bob Proctor. If you’re ready to stretch your thinking and mind in a way that opens you up to new possibilities, sign up for a free coaching session with Laura here.