Close Your Mind to Build Your Persistence 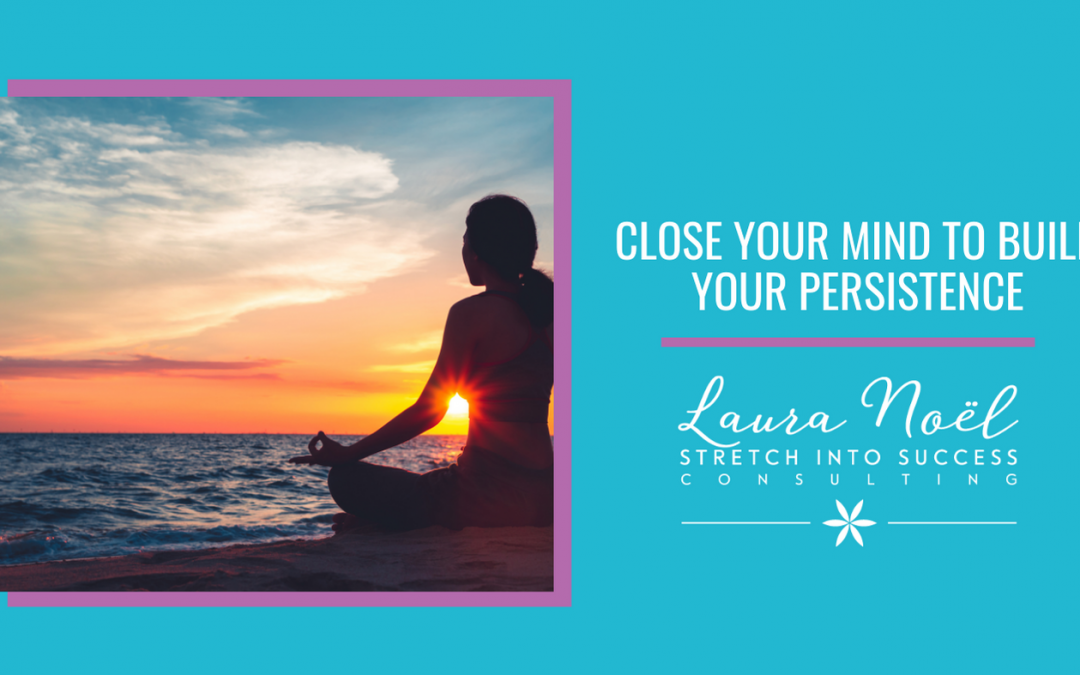 I’m going to start this week with a story. It’s paraphrased a little, but you’ll see how it relates to persistence in a minute. One day the Buddha was walking through a village. A very angry and rude young man came up and began insulting him, saying all kinds of cruel words. The Buddha was not upset by these insults. Instead, he asked the young man, “Tell me, if you buy a gift for somebody, and that person doesn’t take it, to whom does the gift belong?”

The young man was surprised to be asked by such a strange question. “It would belong to me because I bought the gift,” he said.

The Buddha smiled and said, “That’s correct. It is exactly the same with your anger. If you become angry with me, and I do not get insulted, then the anger falls back on you. You are then the only person who becomes unhappy, not me. All you have done is hurt yourself.”

This is the final part of our three-part blog series on persistence, using Napoleon Hill’s book, Think and Grow Rich as a basis. If you haven’t already done so, I encourage you to go to RatRaceReboot.com and download the Quantum Leap Handbook. That handbook will be very helpful in completing the exercises we are using in this series.

We skipped around a little bit in the four keys Hill believes are crucial for persistence: 1.) Having a definite purpose backed by a burning desire for its fulfillment; 2.) having a definite plan expressed in continuous action; 3.) having a mind closed tightly against all negative and discouraging influences, including negative suggestions from friends, relatives, and acquaintances; and finally 4.), having a friendly alliance with one or more persons who will encourage you to follow through in both plan and purpose.

Our focus today is on “having a mind closed tightly against all negative and discouraging influences, including negative suggestions from friends, relatives, and acquaintances.” That is what the Buddha story is referring to. You are so sure of your goal that you are not allowing someone else’s mood, words, or suggestions to worm their way into your brain.

In previous blog posts we talked about setting and accomplishing C-type of goals, creating a plan, and then filling your circle with people who can encourage and help you with that plan. In your Quantum Leap handbook, I want you to make a list of people that you thought would be in your corner, but aren’t really. Maybe you have found that as you’re growing, some people are unconsciously (or consciously) trying to sabotage you or hold you back. It reminds me of the story of the crabs in the bucket—when one crab is trying to get out, the others are all trying to pull him back into the bucket. He’s only a couple of steps away from freedom, but because of the other crabs, he doesn’t get there.

When you are branching off like that crab and you’re leveling up, some of the very people who love you the most might seem like they are trying to sabotage you. Maybe they are; maybe they aren’t. Chances are, it’s more about their own paradigms that are keeping them stuck in the same place and it has absolutely nothing to do with you. For example, if your best friend has a fear of heights and you tell her you are thinking of skydiving, she might say, “I wouldn’t do that. I would be so afraid. You could get hurt.” She isn’t saying that to be mean—she loves you and doesn’t want to see you hurt and she is saying the same things her paradigm would say to her.

The key is not to take those moments personally. Remember, we released all that baggage in December; this is not your baggage to own. Stop carrying other people’s baggage so that you can be open to receiving all the good that’s coming to you.

In the last blog post, we talked about surrounding yourself with people who are going to mentor or coach you. You’re the composite of the five people that you associate with the most, and if those five people are the kind to talk you out of going after your dreams, they aren’t the right five people.

One of the biggest negative influences in your life can be your own inner critic. Turning that off is essential. Your self-image is a part of your paradigm. It’s a cybernetic mechanism, meaning it’s designed to keep you coming back to the same place, like a plane on autopilot. When you start stepping out of your comfort zone with your C goal, you might find that your old paradigm will start to creep into your head. That inner voice of dissent will start trying to bring you back into the crab bucket. You start to think, maybe it’s not so bad in that crab bucket, maybe you could climb back in for just a second and say hi to your old friends.

Before you know it, you are right back where you started. Don’t let this happen. Arm yourself with a self-image that’s in alignment with where you want to go. That’s the key to keeping you focused on your goal.

Acknowledge your fears. Put them out on the table, share them with your mastermind, or write them down. Get those fears out of you by shining the light of awareness on them (you can do this in the workbook as well). Maybe you write: I’m worried that I might fail. I’m worried that I’m not cut out for this, I’m worried that all of my friends will leave me. Or maybe it’s more like: I doubt that I can do this, I doubt my level of competence in this area, I doubt that I’ll find the resources, I’m afraid that I’ll have to go back to my old self or my old job.

Sometimes when we shine the light of awareness on some of these fears, worries and doubts, it’s enough to get them to dissipate and melt away. As you are doing this, ask yourself, what would I rather believe? Write those beliefs down as well, because these are the beliefs that will empower you. I would rather believe that I’m lovable no matter what. I attract my tribe, I attract the people who are in harmony with me. I can achieve this. I can inspire others.

Write some affirmations centered around this newfound courage, this new person that you are becoming. Imagine who you are, how you dress, speak, act. Get into the feeling of those affirmations. Remember, our thoughts are energy. Create positive, powerful thoughts and your energy will be the same.

If you want support or have questions, I encourage you to book a call with me. Also, check out the YouTube Channel for Rat Race reboot and visit our website. If you have some thoughts, please post them below. I’d love to hear from you!