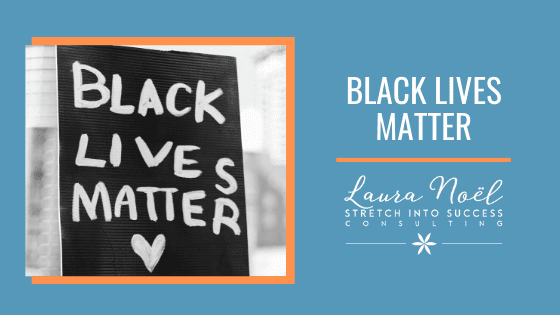 I don’t know about you, but with all of this unrest in our country, I have not been able to rest and be silent.

I used to think to myself, “Oh, all lives matter,” because I didn’t understand the context in which Black Lives Matter was coming from. Someone recently posted an analogy on social media about a hurricane. Saying All Lives Matter is kind of like if there’s a hurricane that comes through that devastates a city, and we call come together to rally and help that city, it’s the same as saying “All cities matter!” … well, no kidding all cities matter, and we don’t have to say it while we’re putting all of our focus and energy into fixing and making the devastated city better. I feel like it’s the same thing here – Black Lives Matter is taking a stand against racism and violence against African American people, friends, and people that I love.

I know that I’m not alone in this. Again, Black Lives Matter is not an exclusion to other lives; it’s that there’s a problem here that needs to be fixed.

I want to share a story from earlier in my days when I was in the Air Force Band. I was stationed in Warner Robbins, GA, and I was traveling with my African American supervisor after a gig in Alabama, driving the equipment truck late at night after our gig from Montgomery back to Warner Robbins. We stopped at McDonald’s to get food, and I could feel him looking at me before he asked me, “Do you feel uncomfortable?” I said no and asked why, and he responded that I was the only white person in the entire McDonald’s. I was so oblivious that I hadn’t even noticed, but I didn’t feel uncomfortable. This experience invited a conversation to happen while he and I had the three-hour drive to Warner Robbins about racism and that slavery wasn’t that long ago. Racism is a legacy of hate that is passed down from generation to generation that influences and impacts every aspect of a person’s life from feeling safe, to economically. Listening to his story really opened me up, and I’m grateful that I had this heart to heart with him because it opened up a conversation and enlightened me on something that I wasn’t aware of.

I didn’t grow up in a racist family, but we didn’t have conversations like this, and I was ignorant of the challenges that African American people or people of color deal with that I don’t deal with. Just because we pass laws and hold people accountable – these are all great starts – it doesn’t mean that racism just goes away. So what do we do? How do we change this?

I don’t claim to know all the answers, but it starts with having conversations and honest dialogue.

Change starts with us as individuals questioning our beliefs and having the courage to ask: What do I believe? How was I brought up? What did we believe? Do I even believe that anymore? Am I willing to talk to other human beings who are different than me to have conversations that question my beliefs?

This takes courage and strength. It’s not easy to question your beliefs and ideas that have been passed down from generation to generation, embedded in us, and are a part of our paradigm.

I can’t change your paradigms for you, but if you’re willing to question your beliefs, you can change them, and you can leave everyone with the impression of increase. You can meet other people, other cultures, hear their stories and understand first where your beliefs are coming from and understand other people and their beliefs by having a dialogue.

So, where do we go from here? That’s another thing that I can’t tell you what to do. There’s no right or wrong answer, but I want to encourage you to be willing to accept that you’re unaware of some things. I didn’t have hate in my heart, but I sure was unaware of what Black Americans deal with and struggle with. I was unaware, but I was open to listening, and I still am. I want to keep the conversation and positive change going. Be open to questioning your beliefs, be open to hearing other perspectives, and deciding what you would rather believe.

For you, maybe it’s when you hear or see something that sounds racist, you say something. You have an opportunity to question, educate, and inspire them.

Always focus on what you want as opposed to focusing on what you don’t want.  Create an image in your mind of how you want us as a Nation or community to live peacefully, thrive and grow…

Now take inspired action.  Follow your path from an energetic space that isn’t fueled by anger – because that’s a reaction – come from a space of responding so that you create the end result that you want.

One thing is for sure: We can’t be silent anymore. What we say and how we treat people matters.