Are Your Thoughts Keeping You From Achieving Your Goals? 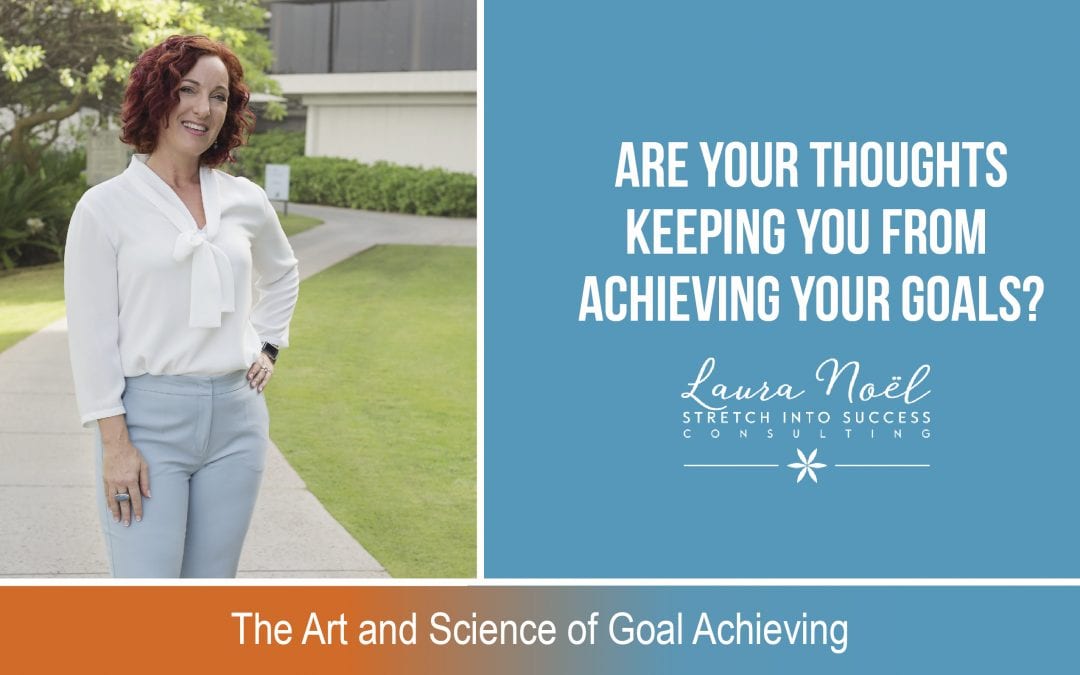 I’ve learned so much from the Art of Goal Achieving with Bob Proctor and wanted to share some of it with you.

Bob talks as lot about frequency. There are levels of energy and levels of vibration. Everything is moving at a high level, a high frequency, a high vibration. When I’m on my cell phone and I’m calling a phone number, that’s a frequency. We’re in alignment, I’m calling that phone number, you pick the phone, and we’re connected via a certain frequency. So our thoughts are also frequency. We can choose to elevate our thoughts, to bring them on a higher level of frequency or we can choose negative thoughts that will bring us to a lower frequency.

The same is true when we have elevated thoughts. When we think of our goal (a grand vision of what we want to be, do, or have) we should think of it as a place where we’re living from, not as a destination. When we view the world from that space of having already having achieved that goal, that automatically is going to elevate our thoughts and our state of being.

So it’s really important to be mindful of the thoughts that you’re thinking. If you’re feeling angry, resentful, worried or guilty, stop yourself in that moment and ask yourself, “Do I want to feel this way?” and on a conscious level, if you don’t want to feel that way then change the thinking.

When it comes to your goals or outcomes, you can change thoughts and results by changing your paradigm. Your paradigm is a multitude of habits and beliefs that are stored in your subconscious mind. Your subconscious mind governs your everyday behavior. So basically, we’re on autopilot. We don’t have to think about what hand to hold the toothbrush and how to brush our teeth or how to take a sip of water, that’s all automatic. About 96 to 98% of our behavior is habitual.

So if you really want to get to the root cause of our results you have to change the paradigm. You can do this through repetition of a new idea that you want to be in alignment with. That’s why affirmations are good. You don’t want to just say affirmations, you want to get to the point where you actually believe it. You’ve been saying these things to yourself so much in so many ways such as listening to it on sleep headphones, saying it in the mirror, saying it when you’re driving that your subconscious mind then takes in this information and believes it.

When you believe it, you generate feelings and emotions in your body and those feelings are the conscious awareness of the level of vibration that you’re at. That’s when you’ll start attracting the people, the resources, the creativity and the ideas that will get you in alignment with your goal and will bring that goal to you.

You just have to let it happen. You don’t have to force. Force negates. You want to get to the point where you’re changing yourself from the inside out and as a result, people will respond to you differently. You will attract different people into your life, people who are in harmony with you.

Make the decision to achieve your goal

This is a difficult thing for most of us because we’ve been programmed to think we need to how we’re going to achieve a goal before we give ourselves permission to set it.

You don’t have to know how, you just have to make the decision. Shift your frequency, shift your energy, align your thoughts with that goal, and I’m telling you… I know from personal experience, I wouldn’t be sitting here today doing what I do; my life has done a complete 180 from where I was a couple of years ago and it’s because I had to suspend belief in the old things that I believed in (those old paradigms) and trust the process, trust someone else’s belief in me, trust a mentor’s direction.

It reminds me of when I first started working with this material and I became a Proctor Gallagher consultant. I was in Hawaii at an event called “The One Percent Club”. Bob Proctor had 15 of us for a week and was working with us as a group and one-on-one.

I was in the military at the time and for 27 years I had been collecting degrees and certifications, because I knew that my career would eventually come to an end. I loved my service in the military, but I knew that I had to be thinking of that next step. I was chasing that “what do I want to do?” and “what am I passionate about?” but I kept telling myself I didn’t know. I was looking outside of myself to find that passion and that next step. But when I started studying this material, I found it. It was in me. It was in me all along. I was looking in the wrong place.

But as I was transitioning, I had this belief that in order to be a successful entrepreneur you had to put in “X” amount of hours, you had to work really really hard all around the clock, constantly working, putting in the blood, sweat, and tears. I believed it had to be hard. I believed that in order to build my client base, I had to be talking to 20 people a day. I was already working long hours and I didn’t want to sacrifice what I was doing in the military to build something else that wasn’t possible for me.

As I shared this with Bob, he asked me, “What are your hours?”. I said, “Well, I leave for work at 6:00am and I probably leave there at 5:30pm or 6:00pm, then I have a commute to get home which could be an hour.” He said, “That’s not a lot of time. You know what, I only want you to talk to two people a week to build and grow your business. That’s it. And if you don’t move them or inspire them to want to move forward then you need to work on your presentation. You need to work on how you’re relating this information.”

It felt like somebody had lifted a bunch of bricks off my shoulders. He gave me permission to take it easy!

You have to be willing to pay the price

When making the decision to go for a goal, you have to be willing to pay the price; standing in your truth and really going for what you want. Paying the price is declaring it and standing up to people who are naysayers.

A price I had to pay was giving up a paradigm that I had. I believed I had to work extra hard, put in 20 hrs on top of the hours I was already working. I had to give up that belief, pay the price and trust my mentor.

I’m very type A. I can be stubborn, stuck in what I believe to be true and what I’m going to do – “I’m going to do it my way!”. So trusting my mentor was paying the price for me. It was a turning point in my career because after that, I found ease and flow in creating my business. Clients were finding me. I became one of the top consultants in the Proctor Gallagher Institute and I replaced my income. I replaced my income!I felt good about making the decision to retire from the military.

Anything that was said or done by the people we spent the most amount of time with became truth to us. So now it’s up to us to create our own truth and it starts with our thoughts.