Are You Unconsciously Blocking Your Success? 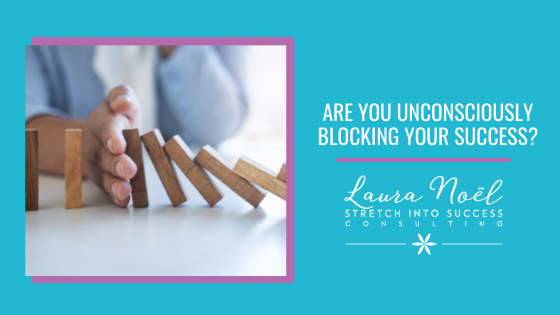 In previous blog posts and episodes of the podcast, we have talked about how to release old baggage, how to forgive, and how to set your goals. But there’s much more to it than that. Attracting what you want won’t happen until you truly open yourself up to receiving. So many of us are unconsciously blocking the very thing we want most by not being able to receive words, kindnesses, or gifts from others.

Let’s take a simple example. How do you feel when someone pays you a compliment? For many of us, we have the knee-jerk reaction of deflecting another person’s kind words. Years ago, I was coaching at a personal development seminar when a friend said to me, “I like your sunglasses.”

Instead of saying “Thank you,” I said, “I got them at Target. They were only a dollar.” Both of us started laughing because we realized we both do the same thing—we deflect compliments away from the personal and talk about a thing instead. How often do you do that, too?

“Thank you” is a full sentence, and too often we forget that. There are a multitude of reasons why we do. Maybe we are feeling unworthy, uncomfortable, or simply embarrassed. So many people I talk to struggle with accepting a simple compliment. You have to practice saying “thank you” and nothing more. Don’t minimize the compliments other people give you because that is the opposite of receiving.

Another example is how you respond when someone does something kind for you, like opening the door. I tend to deflect the offer, and say, “Oh, I’ve got it.” I was in the military for a long time, and that taught me to be an independent woman who didn’t want somebody doing something for me that I could do myself. However, opening a door for another person is just a kindness, and by not accepting and receiving that kindness, I am blocking that energy in my life. When someone does a kindness, accept the action and say thank you. That’s it.

We also tend to rebuff people who are trying to help. Like a sales associate who asks if they can help you find anything. Most of us say, “No thanks, I’m just looking.” When I’m networking on a social media platform, I often say something nice to someone I have connected with or make a comment about something I saw on their profile. Recently a gentleman who was a regional sales leader replied with, “I’m not interested in anything.” His immediate thought was that I was there to sell him on something, but I wasn’t—I was connecting because I like to get to know the people on my connections list. This person was in sales and he was scared of being sold to (and I get that, because nobody wants to be sold to). He wasn’t receiving my compliments and comments because he was too busy rejecting my words. Try accepting the help or comment the next time someone offers it and see how that changes your mindset.

How we receive one thing is how we receive pretty much everything else (I’m only talking about receiving good things, not about receiving negativity or insults; that’s a whole other topic we will get into later). The way that we receive becomes an unconscious habit that has an effect on ourselves and our circle. Imagine giving someone one a gift and instead of thank you, they say, “No, no, you shouldn’t have. It’s too much.” That response is almost insulting to the giver, but the receiver is saying it because they feel guilty that you went out of your way, or they feel embarrassed or unworthy of the gift. Sometimes people say those things because they feel like they shouldn’t take more than their fair share, but here’s the thing—there is a share for everyone. Abraham Hicks said the pie is infinite—which means we literally can’t take more than our share.

I used to be that person who couldn’t receive the kindness and goodwill of somebody else, until I realized that when I was doing that, I wasn’t valuing what the other person saw in me. Learn to take their kindness in, accept it, and love yourself enough to get over the discomfort you have with receiving.

In 2019, I went to Kenya with the Unstoppable Foundation. I’d been a donor for a couple of years and was visiting five of the villages where our funding had made an impact on clean water, nutrition, agricultural training, job training, medical care, and education for girls. At the first village we visited, the people greeted us with singing and chanting and jumping up and down. They were just loving on us and showing the most beautiful level of gratitude ever. At first, it felt a little uncomfortable and embarrassing that they were making such a big deal about it.

The founder of the Unstoppable Foundation acknowledged that we might feel uncomfortable or awkward. She said the best thing to do is to overcome that feeling and simply accept the love. I decided to open my heart and gracefully receive the outpouring of the villagers’ gratitude, love, and appreciation. Ironically, doing that enabled me to later give back more than I ever thought would be imaginable.

Once my heart was open and I was receiving without reservation, an idea came to me to fund a two-year college program, something that would cost around $200,000. Up until that point, I had given about $25,000 over the course of two years. I had no idea how I was going to raise almost ten times that amount, but because I was open to receiving, I had that college program funded within six months. People would say, “Oh my gosh, this is perfect timing. I was just looking for an opportunity like this.” I was in receiving mode, and the opportunities opened up for me because of that.

Over the last month, we have talked about letting go and releasing the old baggage so that we have room and space to receive. When you create space for yourself you can do more and have an even greater impact than you realized. It all starts by being open to receiving in all ways.

Receiving and giving are part of a cycle that perpetuates itself in so many ways, including financially. Money is meant to be in circulation; there’s an ebb and flow to it, as some goes out, some comes in. The same energy exchange is found in giving and receiving. You can’t expect to receive the goal, the ideas, the inspiration, the opportunities if you haven’t opened yourself up to receiving in all ways.

What I challenge you to do this week is to be aware of how you receive and to not beat yourself up if you automatically reject the compliment, comment, or kindness. If someone pays you a compliment and your urge is to deflect it, catch yourself and course correct. If you have to, say, “Can I have a do-over?” and try your answer again. By opening yourself up to receiving in all ways, you open the door to receiving everything you dreamed of having.